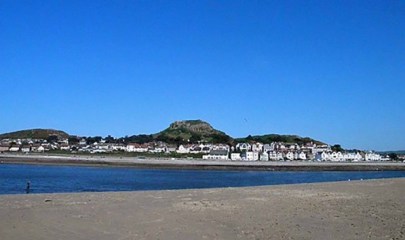 I was walking the dog on Conwy Beach this morning looking toward Deganwy and felt God speak to me as I was looking at the basalt column that rises above the down. He felt Him say “on this rock I will build my church” so I asked for a bit of explanation as it’s a verse we all know well and have often been told it means the confession of Peter that Jesus was the Messiah.

As I was walking I kept thinking and chewing this over. Basalt columns pushed themselves up during a time of great volcanic upheaval, not a peaceful time. The rise above the surrounding area because erosion has stripped away all that may have surrounded them. This is how my faith feels. My faith came up during a time of upheaval

for me – single mum leading a lifestyle that focused around drinking, drugs and random people staying at my house. When it started it was surrounded by loads of supports, theologies, rules, etc but all those have been eroded away.

I went to the funeral of a dear friend last week who’d died at 43. A lovely, crazy, opinionated friend who sometimes drove me to distraction who had argued through her Christian faith. Gone way too soon. At her funeral the vicar read I Corinthians 13, the love chapter as it is often known. Whilst listening to it I could feel something stirring in me but wasn’t sure what. The walk today revealed what it was. Everything has been stripped away. I no longer care about whether it makes you a “proper” Christian if you speak in tongues or prophecy or say the right prayers at the right time or whatever silly ideas I had. I’ve been watching Gunpowder [and have studies this period too] and it amazes me how people were willing to die or to take the life of another for a believe which I’m not sure God even cares about. I may not have been that bad when I first came to faith but I know I lost friends because of my dogmatism. That has all been stripped away. Now very little remains but I stand – not so much tall but I stand like the basalt column. 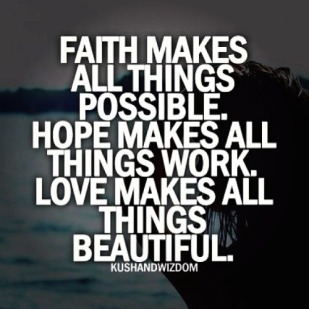 What is left? Faith – A faith that God is bigger than anything I ever hoped or believed and that He is always there for me whatever I walk through and that I will stay with Him forever. Hope – that God is bigger and that those who’ve died before me will be with Him, that those who don’t profess to knowing Him on this earth will be with Him at the end [see I can’t believe that if we are all made in the image of God – and that we don’t just become made in that image when we “pray the prayer” – that God will take what He has made to be with Him . But that’s another thought entirely ] Love – that God loves me, loves those I love, loves those I don’t love too, and that I must learn to love too.

Faith and Hope and Love that is all that remains but I feel that God said to me today that this is what He’s building His Church on and I need to stand on that no matter what more the storms have to throw at me.