I have been pondering all this wedding between Prince Harry and Meghan and it struck me that their wedding was not much different from weddings from Medieval times. Anyone who was anyone would be invited, which would include people famous in their field. Royalty liked to be with the movers and shakers unless they had been banished from court. So having actors and musicians turn up to Harry and Meghan’s wedding is no different from having Geoffrey Chaucer turn up. Actors were not seen in the same light back then but there would be more than just royalty.

The common people would also want to be a part of it. Any excuse to indulge. So there would be lots of people lining the streets and cheering. There would be places where 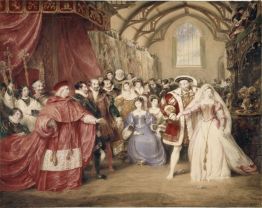 these common people could then go and eat, drink and be merry. Very similar.

As for who Harry has married. Yes in days of old princes would be expected to marry who they were told to but that was to strengthen the kingdom. Many would have someone who would not make a good alliance as a lover and mother of their children. Some may then go on to marry their lover once the throne had enough heirs that their marriage would make no difference.

We no longer have a monarchy that needs to make political alliances to hold on to power. Our royal family doesn’t hold any real power at all.  Our royal family now mixes in different circles to those of the Middle Ages. The demarcations between the upper class and lower class are not as divided as it was. I do think too that our top actors, top pop stars, and top celebs are the elite of today when titled people, knights, lords, kings, princes, were back then.

Both Harry and William have been mixing in what appears to be a different circle to how we think royalty should behave but that, I believe, is because we still see a Victorian view. When in fact there many of them were related to each other. With travel and

changes in lifestyle, our young royal family are actually doing very similar to their ancestors of old. William’s children won’t die of some unknown death because most of the things young princes use to die of back in the 14-16th Century can now be treated very easily with modern medicine. Harry does not need to give heirs to the throne in case his brother’s die out. Neither of our princes needs to keep the crown secure.

Things have not changed as much as we think they have!

(NB – these are my thoughts from what I remember of history. I wanted to get a post out. I have not managed to check them out properly yet. Wish I had more time 😦  )